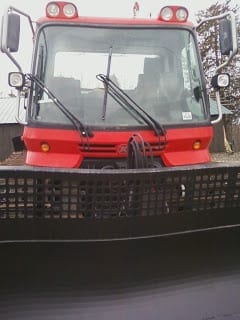 As a skier or rider at Mount Peter you likely won't see this machine out working. You can tell it does most of its work after hours by the large lights on the top and sides.

Youngsters compared to us (Mount Peter opened in 1936), PistenBulley started making snow grooming machines in 1969. The key features - low center of gravity, maneuverability and wide tracks - allow it to groom straight up the steepest terrain including Dynamite and Wild West.

This machine and all our other snow making equipment is nothing without our dedicated Mountain Operations team.

Like the PistenBully, you likely won't see many of them while you're skiing or snowboarding at Mount Peter. A snow makers "day" usually starts when the sun goes down and ends around sunrise.

Every once in a while, Mother Nature tests our patience. But in those times, when you look out your window and there's no snow on the ground -- there IS snow for skiing and snowboarding at Mount Peter in nearby Warwick, New York thanks to these hard working guys.

So, here's a shout out to our snow makers! Thanks for making the best snow in the region!